The audio board is “polyphonic,” in contrast to most other embedded audio players. This implies it can simultaneously play multiple tracks. This is done by maintaining multiple file pointers and digitally mixing the tracks to Tsunami outputs. Tracks can start at any time in polyphonic mode, regardless of what other tracks are playing, including copies of the same track. The only restriction is the number of “voices”, the number of different tracks that can be played at any given time. It currently has 18 low-latency stereo voices and 32 low-latency mono voices available.

Tsunami Super WAV Trigger is built around Atmel’s high-performance ATSAMS70 ARM Cortex-M7 processor. It can play 44.1kHz, 16-bit mono, or stereo.wav files (tracks) from a microSD card. Additionally, it can play up to 18 stereo or 32 mono tracks independently and simultaneously, depending on whether it is in mono or stereo mode. It also mixes them to either four stereo or eight mono line-level audio outputs.

Each track has its own volume control and can start, pause, resume, loop, and stop independently. This allows you to create the perfect interactive blend of music, dialogue, and sound effects. In addition, the board also allows for true seamless looping over any track length. The Qwiic system allows for solderless connectivity to the rest of your system. However, if you like to have complete access to each pin, the manufacturer has broken out 0.1″-spaced pins. With either 16 programmable trigger inputs, a serial control port, or a dedicated MIDI port, up to 4096 tracks can be indexed and started with low latency (typically 8ms).

What makes it even more remarkable is that the Tsunami features eight audio output channels. Thus, it can be configured as either eight mono or four stereo pairs. You can choose between mono and stereo architecture in different firmware versions. Also, the mono version has a new “Synced Set” trigger feature that can initiate up to eight mono tracks on adjacent outputs.

With a single trigger, these tracks will start and stay in sample sync for playing stereo or even 5.1 or 7.1 surround sound content. Hence, any track routes to any output in a dynamic manner. Furthermore, each output offers independent real-time volume and sample-rate conversion.

Tsunami is also compatible with other microcontrollers, such as Arduino. A serial control port, combined with a robust serial control protocol, allows you to access all 4096 tracks and use Tsunami’s internal faders for real-time mixing, crossfading, and pitch bending. All of Tsunami’s functionality can be accessed from within your Arduino sketch using an Arduino Serial Control Library. 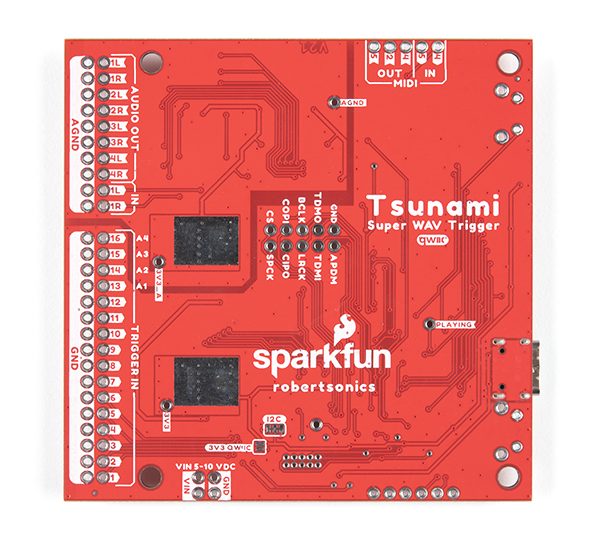 Discussing further, the board features a dedicated MIDI port with an integrated optoisolator. This port makes it easy to connect to your MIDI keyboard or any MIDi controller. It supports MIDI note-on, note-off, pitch bend, and program changes messages, and controller messages for controlling sustain, attack, and release times, and volume in real-time. Even if you run out of voices, a voice-stealing algorithm ensures that new notes are played. Talking about the software support, the board can be programmed using the Arduino IDE or Python, and it can also be controlled through serial.

The Qwiic Tsunami Super WAV Trigger board is available on SparkFun at $79.95. For more information visit the official product page. Images and technical specifications have also been taken from the product page.

9 Ways to Show Respect for Yourself