“The total abundance of moths in Britain has decreased by one third over the past 50 years. Understanding, and reversing, the causes of this worrying decline is a top priority for us,” said Richard Fox of Butterfly Conservation, and a member of the research team. “This research provides a vital insight into the negative impacts of streetlights on moth populations.” 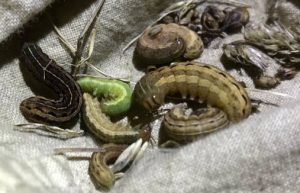 Douglas Boyes of UKCEH spent more than 400 hours sampling for caterpillars along roadsides at a total of 55 lit and unlit sites in the Thames Valley over the past three years. Caterpillars were chosen because they are a lot less mobile that adult moths, allowing more precise estimates of impacts on local populations. 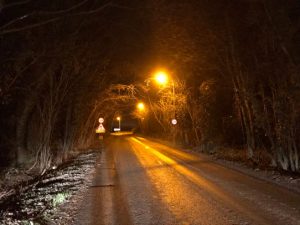 “The rapidly increasing prevalence of LED lights, which are often much brighter as they are so energy-efficient and cheap to run, is likely to increase the negative impacts of light pollution on insects,” said Boyes. “This is expected to have knock-on effects on other species, including predatory insects, hedgehogs, and songbirds, which need to find hundreds of caterpillars a day to feed themselves and their young.”

Can anything be done?

“LEDs can be modified far more easily than sodium lamps, for example, by reducing their intensity through dimming, and using filters to block the blue wavelengths of light that are most harmful to insects,” said Boyes.

Energy-saving systems are already available to dim streetlights on seldom-used roads, using detectors to brighten them when a car approaches.

The work is published as ‘Street lighting has detrimental impacts on local insect populations‘ in Science advances, and can be read in full without payment.