It was originally developed by Markus Frejek, but the project has been continued by Karl-Heinz Kübbeler and Markus Reshke. Simply insert the relevant component, push the button, and read the displayed characteristics.

For this version, the code comes in the form of a regular sketch for ease of uploading and modification (there are other versions that contain add-ons where the software comes as ready-made firmware (.hex file).

It’s estimated the project could cost less five dollars and be made in less than an hour. Specifically, the parts list includes a Nano R3, a 128 x 64 OLED display (SSD1306), a slide switch and seven resistors.

According to its creator, the autodetecting and auto-ranging electronic components tester can process:

You can see it’s Fritzing sketch below. 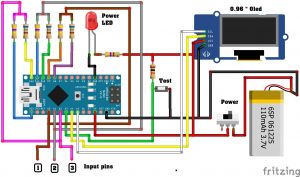